We are all working together to ensure that the laws allow each citizen to choose and obtain end-of-life care that is consistent with his or her personal concept of dignity.

Each of our members has his or her own background, both in education and personal experience. This beautiful diversity is what makes our team strong! 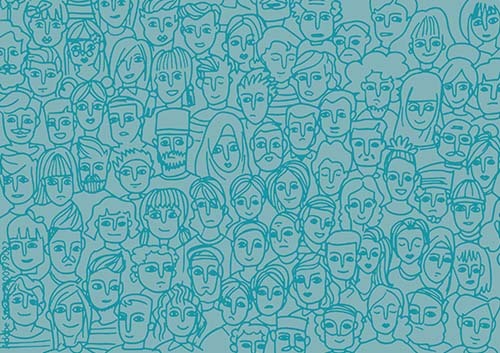 With a DEC in Theater Production, specializing in management and stage technique, Audrey Wyszinski has been a manager and coordinator in the entertainment industry since 2008.

Her involvement in a range of productions (theatre, circus, music, and dance) led her to work throughout Quebec, the United States, Argentina, and Brazil. Over more than 10 years, she acted as a stage manager, working with big names in Montreal entertainment: Montreal National Circus School (ENC), the Spectra team for the Francofolies and the International Jazz Festival, as well as the Festival international Nuits d’Afrique.

Driven by an inquisitive mind, she later took an interest in osteopathy. Between 2015 and 2019, she attended a few years of classes on the topic, and joined the board of directors of the SoCaTO (Canadian Society for the Tradition of Osteopathy). As a member, she put her creativity to use, taking on member communications, redesigning the website, and developing a new brand identity for the organization. These were major challenges that, in some ways, she is now addressing within the AQDMD.

After a life event that significantly affected a member of her family, Audrey decided to get involved with the AQDMD, first as a member of the board of directors and then as Director General. Her greatest wish is for every person to be able to experience their death with consent, peace, and dignity; here, dignity is a deeply personal concept that each individual must define for themselves.

A neurosurgeon who has now retired from active practice, Dr. Georges L’Espérance has nearly 40 years of experience in the field.

He graduated from the Université de Laval à Quebec in 1984, and later completed, in 1998, a master’s degree in Health Services Administration at the Faculty of Medicine of the Université de Montreal. He worked as an assistant clinical professor in the Department of Health Administration until 2015 and was an assistant professor of the Department of Surgery in the same faculty.

He became a member of the Société des médecins experts du Québec (SMEQ), which was renamed the Société des experts en évaluation médico-légale du Québec (SEEMLQ) in 2008 and was elected President from 1998 to 2016. In 1999, he and Doctor François Sestier cofounded the Insurance Medicine and Health Sciences Expertise program, under the auspices of the UdM Faculties of Medicine and Law.

Over the years, his clinical experience led him to question the purpose of contemporary medicine. At the time, everything was done to sustain life under optimal conditions, but he realized that this all had to be done within reason. He began to reflect on overmedication, therapeutic obstinacy, and the concept of dignity in a person’s end of life, which is closely related to respect for patient autonomy. He stated, “This road inevitably led me to a personal and deeply rooted conviction that medical assistance in dying (well) was becoming an integral component in the armamentarium of end-of-life care.”

It seems only natural, then, that Georges L’Espérance went on to become President of the AQDMD in 2014, furthering the remarkable work of Mrs. Hélène Bolduc, the AQDMD founder, and of several eminent medical colleagues who accompanied her on this humanist journey (Dr. Marcel Boisvert and Dr. Marcel Boulanger).

Today, he devotes most of his time to this cause.

Pierre Sheridan began his career in the early 1970s, as a journalist for the weekly program TV Hebdo. He conducted many interviews with the people making television and covered all programs launched by a range of TV networks.

He also covered several events abroad, particularly in the United States (annual broadcasters’ meeting), in France (MIPTV, international television market), in Switzerland (Montreux Rose d’Or awards, as a member of the international press jury), and in Austria, creating behind-the-scenes coverage of the 1976 Innsbruck Winter Olympic Games. In 1979, he left TV Hebdo to join the communications team of educational television in Quebec, as the Editor in Chief.

For 30 years, until his retirement in 2009, he was a public relations officer, and then the director of Public and Media Relations at Télé-Québec. Over the years, he developed a rich network of contacts in most of Quebec media.

Starting in the early 1980s, he volunteered for various community organizations, including Gai Écoute (now Interligne), Fondation Émergence, Fonds Diversité sexuelle Laurent McCutcheon, as well as the Association des Amis du Parc Médéric-Martin (which he co-founded). Pierre has been a member of the AQDMD since 2015. He became an organization director in 2020 and was appointed Vice-President a few months after his arrival.

His interest in medical assistance in dying dates back to much earlier, in 1990, when he was struck by a Janette Bertrand drama broadcast on Radio-Québec.

In Avec un grand A, Yvette and Roger portray an elderly and ailing couple that wants to die together, with dignity, by resorting to suicide, even though their children are unable to accept this decision. Because he was responsible for media relations on this series, his preparatory discussions with the writer allowed him to reflect on a person’s fundamental right to freely choose their own end of life. Years later, in July 2019, Pierre accompanied his spouse, Laurent McCutcheon (then Vice-President of the AQDMD) until his last breath; his partner had requested and received medical assistance in dying.

Born on the South Shore of Montreal, Michèle prides herself on being among the very first baby boomers. After studying accounting, she volunteered for several organizations while working in small businesses and educating her two daughters.

With nearly 40 years of experience in the field of administration, most notably as an executive assistant at VibroSystM and at Garderie Ses Amis, Michèle is a powerful planner on the AQDMD board. Her big heart also led her to get involved as the treasurer of the Otterburn Park FADOQ and as a board member of the Coopérative d’aide à domicile Aide-Atout, which provides housekeeping services and home help to people dealing with a loss of autonomy and to families in the Vallée-du-Richelieu and Saint-Bruno-de-Montarville.

After seeing her father suffer for long hours, at the age of 90, without the option to shorten his life, Michèle became a member of the AQDMD in 2013, then offered her help as a registrar in 2015. A few years into her retirement, she joined the Association’s board of directors in 2020, as Treasurer, putting her expertise and her touching history to use in this cause.

She has stated, “Every person must be able to choose, free from any influence, when to end their life, if their physical or mental state no longer allows them to enjoy this life.”

A politically active woman, Catherine Leclerc began her social involvement at a young age. She worked as President of the Exécutif régional Bas-St-Laurent–Gaspésie–Îles-de-la-Madeleine, was a member of a political party’s youth national executive committee for three years and was manager for 6 years

She also took on various roles working with unions, was an activist for many organizations like Opération enfant soleil, Héma-Québec, and the Alzheimer Society, and she defended causes like gender equity and secularism within government.

With twenty years of experience under her belt in business process analysis and organizational change management at TELUS, and motivated by a personal family experience, she eventually decided to use her communication skills and her natural influence to support the AQDMD and medical assistance in dying (MAID). She is particularly sensitive to the issue of neurocognitive degenerative disease, which affects her mother, who was diagnosed with Alzheimer’s disease, and is currently fighting to have advance requests included in MAID legislation.

In her words, “For 15 years now, my family and I have been helplessly witnessing the devastation of this disease. It creeps in and tears away the person you love, bit by bit, chipping away at cognitive and intellectual function, personality, and the memories that connect your lives. Basically, we have watched the essence of her humanity disappear over time.”